KEY FINDINGS OF THE SURVEY INCLUDE:

There is a significant technology trust gap among Americans, with most believing that we ought to have a higher level of security for online data than we have today.

The vast majority of respondents own smartphones and use them as their primary access point to the Internet.

• Consistent with the use of smartphones as the primary access point to the Internet, new cyber attack vectors specifically targeting these devices are emerging, as two-thirds of respondents reported receiving an attempted cyber intrusion via text message.

A majority of respondents favor U.S. government support and investment in American technology leadership, and want Congress to avoid mandates or aggressive regulation of tech companies that would harm our global competitiveness.

BY A LARGE MARGIN, AMERICANS BELIEVE THERE IS A TECHNOLOGY TRUST GAP, WITH 63% OF RESPONDENTS INDICATING THAT WE OUGHT TO HAVE MORE SECURITY FOR ONLINE DATA THAN WE DO TODAY.

Nearly two-thirds of Americans believe there is a gap between the level of confidence we should have in the security of our personal data online compared to the level we actually have, with just 15% disagreeing. Large majorities of Americans are concerned about various types of security threats to their personal data, with nearly 7 in 10 Americans indicating concern about malware, trojans, phishing or smishing attacks, spyware, viruses, or third- party data breaches. And nearly half of respondents indicated that they were more concerned about protecting their sensitive personal data on a smartphone over a laptop or desktop computer. 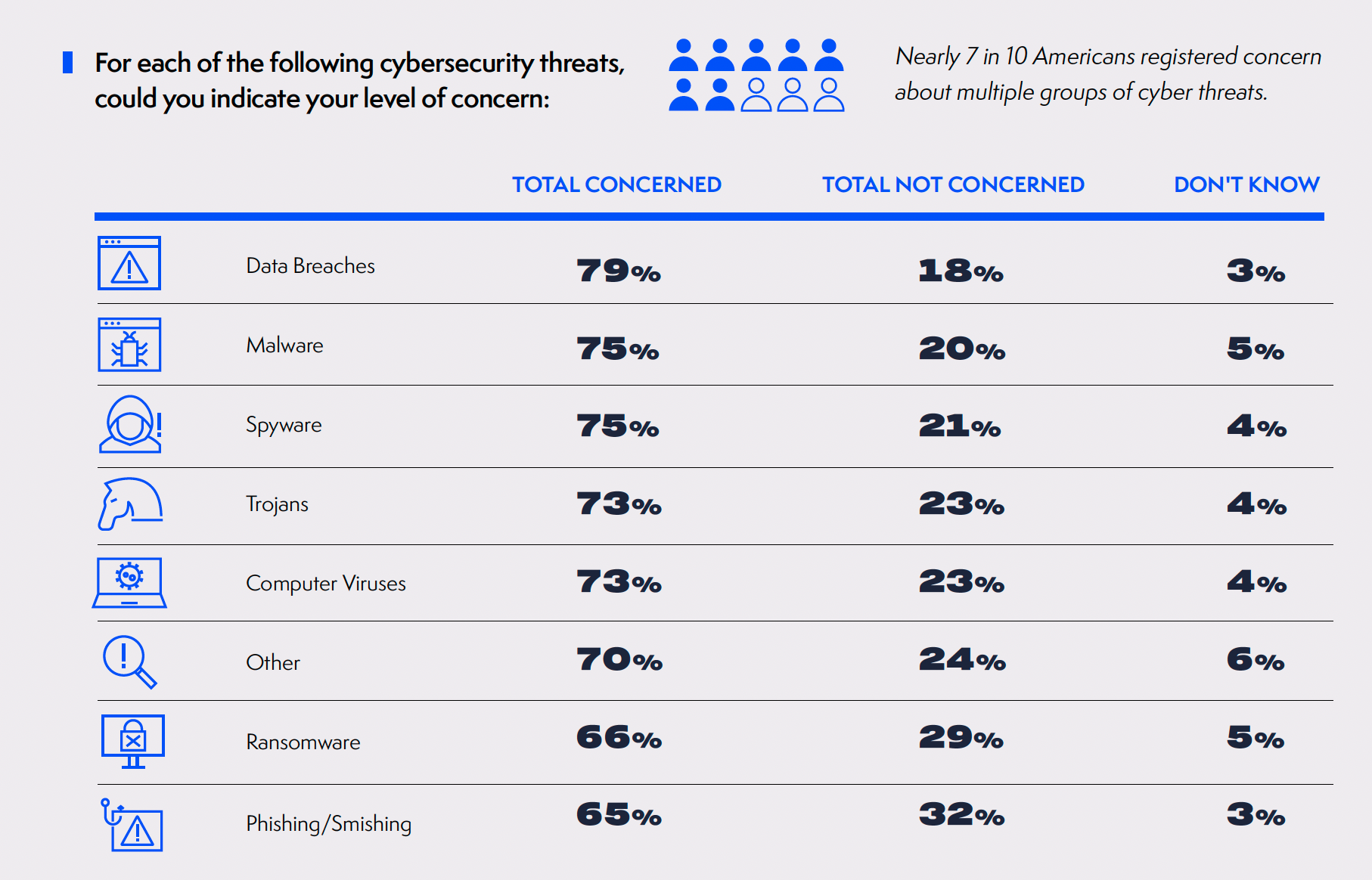 Respondents registered a strong preference for American technology companies over their foreign counterparts and foreign governments on whom to trust to protect their personal data. American device manufacturers were the most trusted entity, with 48.7% of respondents indicating they either completely or mostly trusted them with 17.5% saying they completely or mostly did not trust them, for a net trust rating of +31%. Foreign governments rated the lowest of any option, with a -47% rating. While the public distrusted all foreign entities across the board, foreign device manufacturers had a -33% net trust rating. 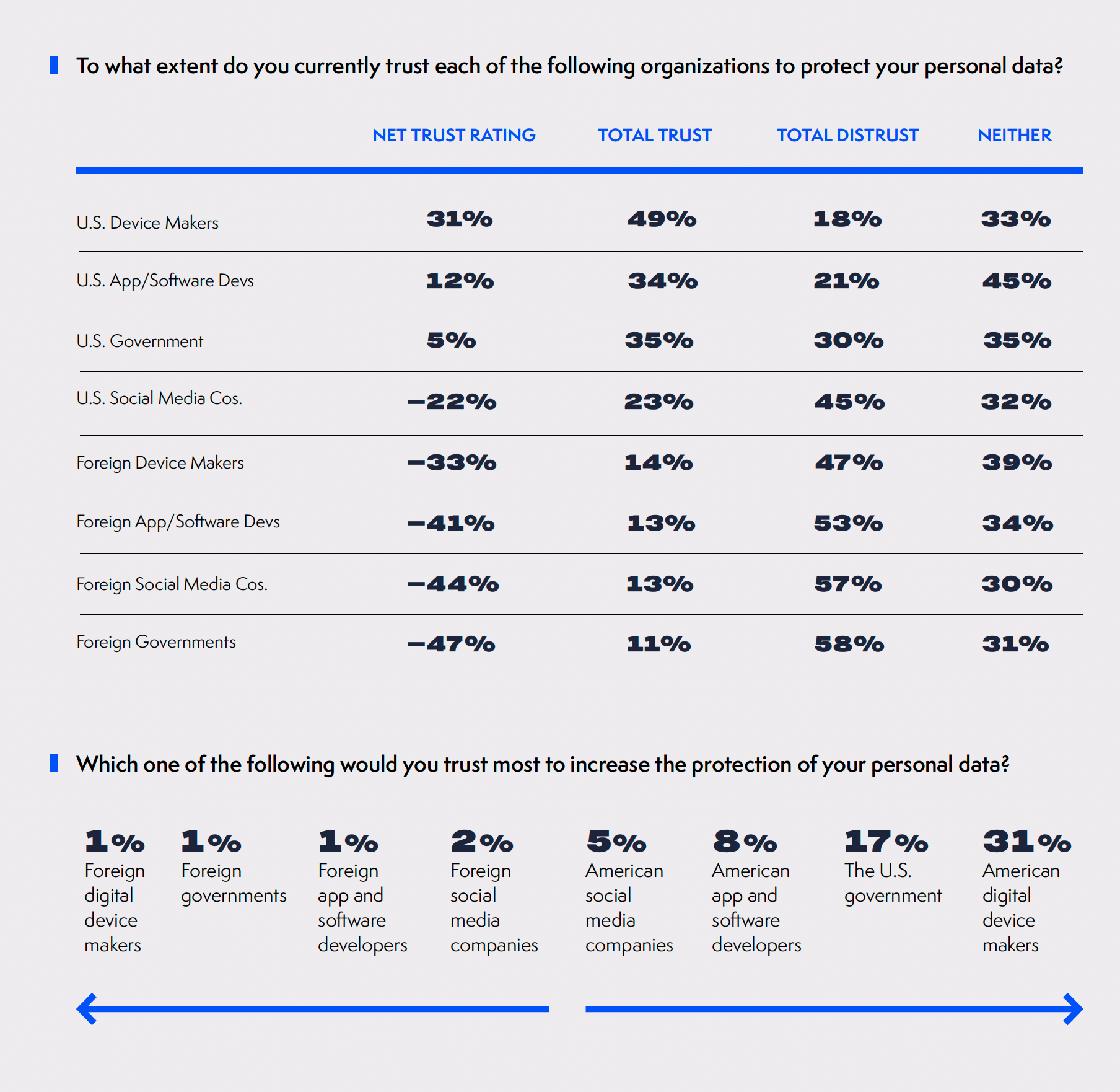 Respondents indicated that they keep their data safe in a range of ways. Large numbers of respondents indicated that they regularly avoided certain risky activities on their own, such as avoiding suspicious links in emails or texts (77%) and using sensitive apps on public Wi-Fi (61%). Many of the affirmative actions to protect personal data that scored highly among respondents are often built into or prompted on devices or operating systems, such as downloading apps from trusted sources (official app stores 61%; well-known companies 58%), updating the operating system (59%), using strong or complex passwords (58%), and updating software and apps (56%). Actions that relied mostly on the users themselves were not regularly used by the majority of respondents, such as checking device settings for security and privacy (40%) or checking app settings for security and privacy (38%). 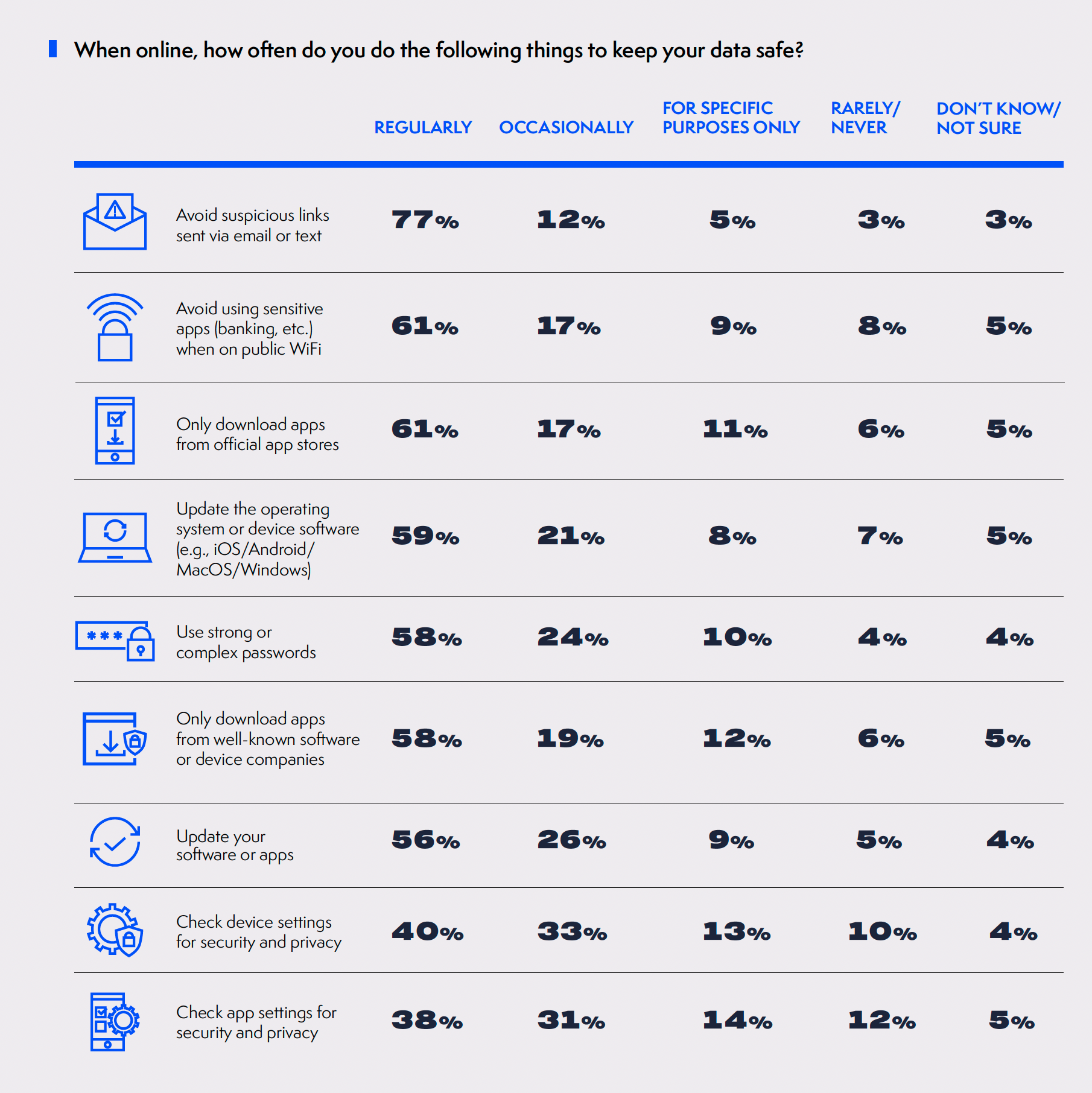 SMARTPHONES ARE BECOMING INCREASINGLY ESSENTIAL TO ALMOST EVERYTHING WE DO.

Considerably more respondents indicated that they owned a smartphone (90%), than any other device option, with laptop the next highest at 70%. Smartphones are increasingly the gateway to the Internet, with nearly twice as many using smartphones as their primary online access point (45%), then the next closest choice (laptops at 25%). And people are using them a lot, with nearly 75% of respondents using their smartphones for more than three hours a day. Smartphones are so essential to some that 21% said that they would prefer to have a root canal rather give up their smartphone for a week. 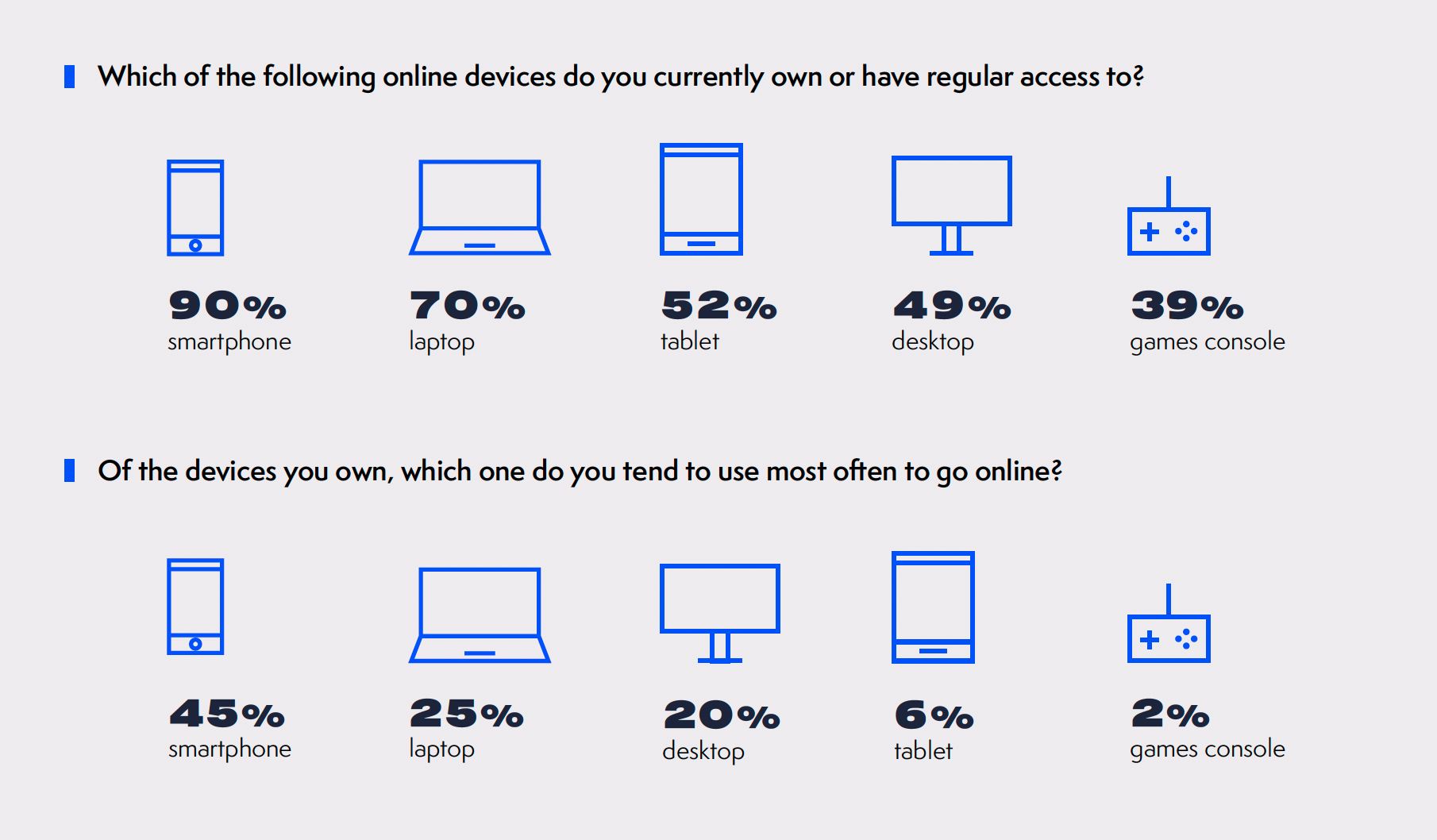 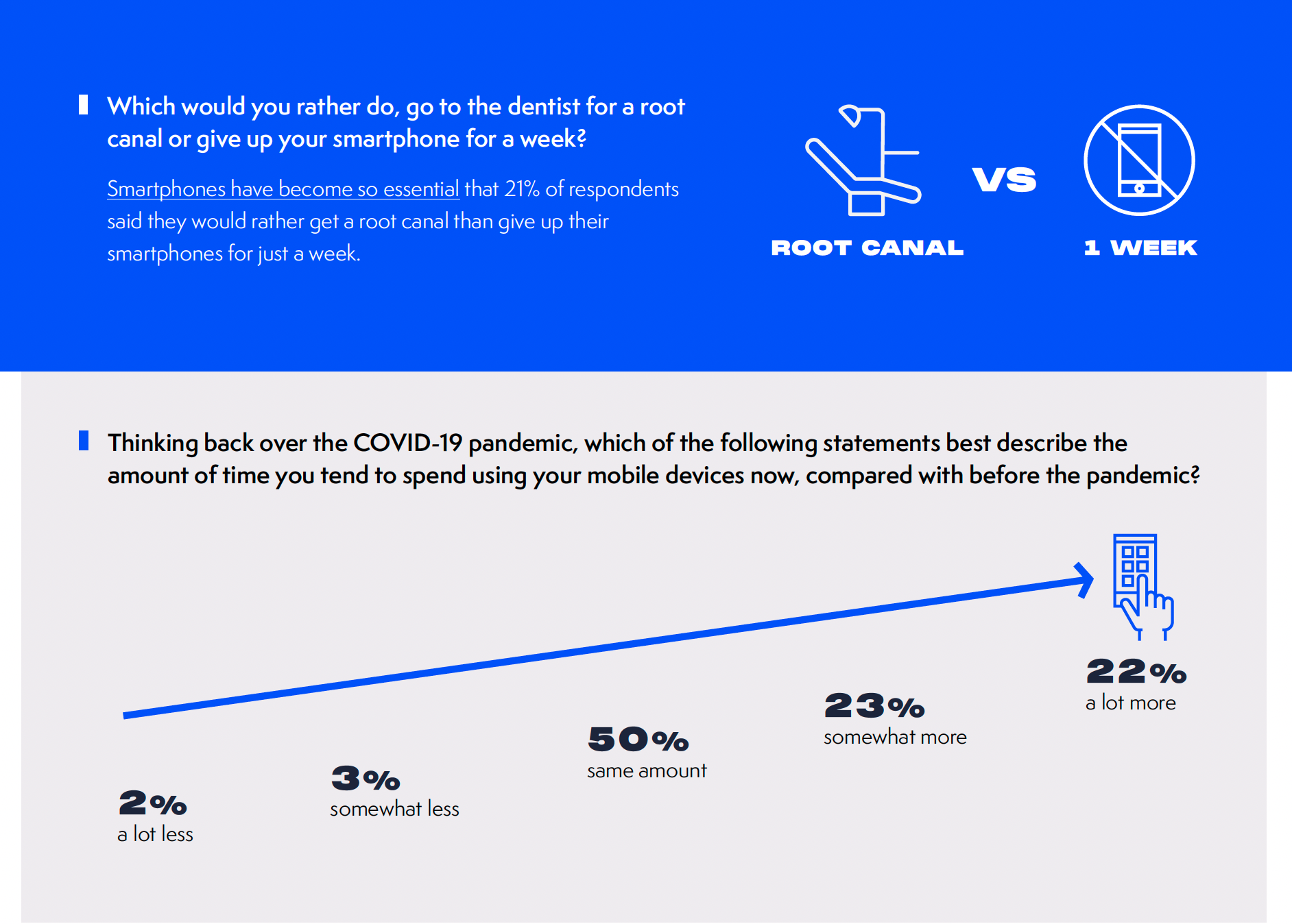 Cybercriminals go where the users are, and with increasing smartphone usage, new forms of attacks are on the rise: two-thirds of respondents report receiving illegitimate texts in the last year that were likely intended to trick them into giving up private information or installing malware. This form of cyber attack vector, called smishing (the SMS/text version of phishing) is growing in significance along with the ubiquity of smartphones and the sensitive information that they contain.

STRONG MAJORITIES FAVOR U.S. GOVERNMENT POLICY THAT SUPPORTS AMERICAN LEADERSHIP ON TECHNOLOGY WITH BIPARTISAN INVESTMENT IN INNOVATION, WHILE ONLY AROUND A THIRD WANT NEW REGULATIONS OR GOVERNMENT MANDATES ON TECHNOLOGY COMPANIES.

Nearly the same 6 in 10 urge the United States to lead an Atlantic alliance with our European partners for a strong and united tech policy to counter China (59%), want Congress to promote U.S. technology leadership with bipartisan investment in research and innovation to stay on the cutting edge and to better compete with China (59%), and expect the U.S. government to fight for a level playing field, including global standards that apply equally to American companies and our foreign competitors, like Chinese companies (60%).

And nearly two-thirds (64%) believe that Congress has a key role in promoting U.S. technology leadership to ensure we maintain our lead as home to the world’s most innovative companies.

Equally clear is what the American people do not want: more than half of Americans want Congress to avoid degrading U.S. technology leadership or hamstringing our ability to build cutting edge technologies (55%), while only around a third of respondents want government security mandates (28%) or aggressive regulation of technology companies (37%). 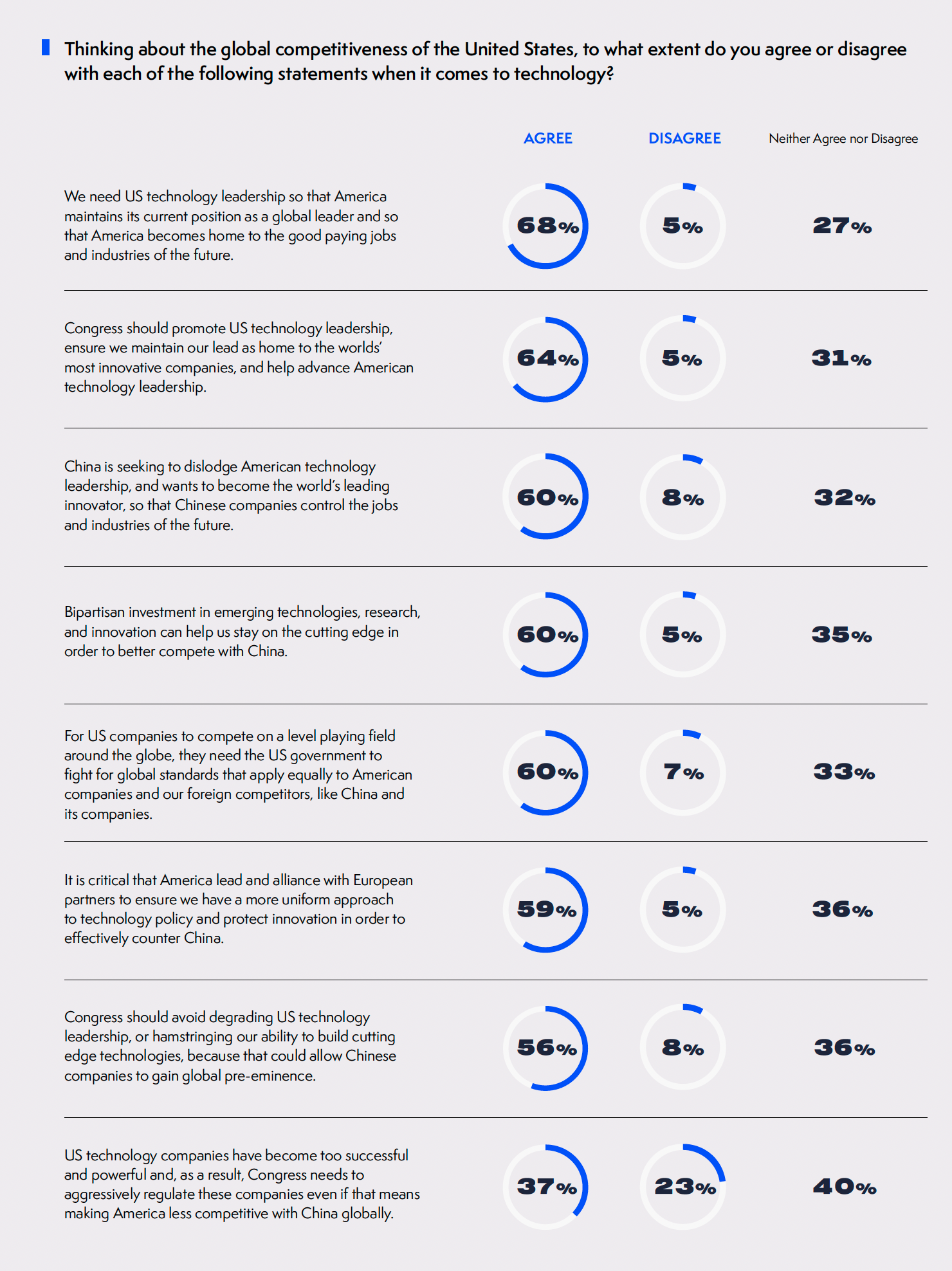